One of the hardest chords to learn as a beginner is the F chord. New players struggle to play this chord effectively. This guide will show you how to master the F chord, so you don't struggle with it.

The first thing you should do is to ensure that you're using a light gauge string. This will make it easier for you to press down on the strings, and your hand won't get fatigued. If you're using an electric guitar, I recommend the 009 set. This is a lower gauge and easier to play. If you're playing an acoustic guitar, go for the light set and not the medium set.  If you have a classical guitar, the nylon strings you already have will be suitable. A lower action on the string height will make it easier to play the chord. You can have this set up by a guitar technician. If your string height is too high, pressing down the chord will be more difficult. 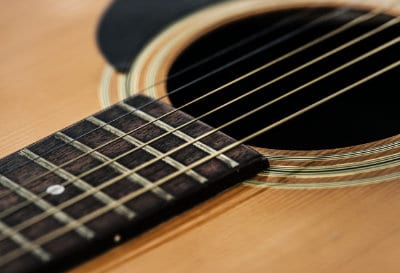 You should always warm up your hands before you attempt the F chord. Play the guitar for 10 to 15 minutes to get your hand loosened up. You can do this by playing finger exercises or running through scales. The F chord takes a lot of effort from your fingers, so you want to have your hand warmed up if you want to master it.

It’s best to learn the basic open position chords before you attempt the F chord, leaving this one till last. If you try to attempt it in the beginning, you will just get frustrated. You will build up finger strength and stamina by learning the basic open position chords first. By learning these chords before you attempt the F chord and other barre chords, you will strengthen the calluses on your fingertips making the harder ones easier to press down and hurt less too.

First F chord you will learn is the basic F chord at the first fret. You will bar the first two thinner strings, which are the B string and the E string.  The first finger needs to be flat against these two strings. You'll have to press down quite firmly on the notes, so they ring. You want to put the second finger on the 3rd string at the second fret. The third finger will go on the 4th string at the third fret. This gives you the basic F chord.

The basic chord for F can give some players problems. It's easier to play the full F barre chord at the first fret. Here is how you do that:

The second, third, and fourth fingers underneath the bar make up an “E” shape. The F major barre chord is based upon the E chord. You make the E chord and place the bar across the strings with your first finger. 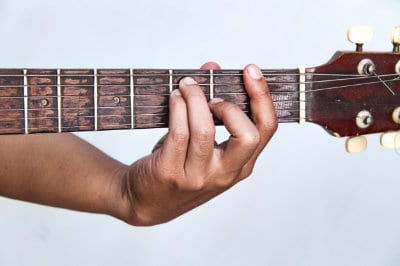 Try the Barre Chord Higher Up 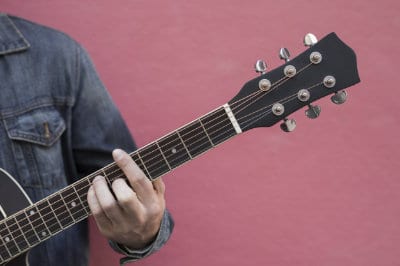 When you try to learn the F chord, you're going to get hand fatigue. It takes a lot of time and practice to master this chord. This is the basic, or do you need to learn for all of the other barre chords. Once you can do this, the other barre chords will be a lot easier. You can expect to have some hand fatigue when you are learning the chord. Try playing for around 5 minutes and then relax your hand.

If you have hand pain or finger pain, stop what you're doing and give yourself a longer time to relax. You may have to struggle with this chord for several weeks. Every player goes through this process as the F chord and the related barre chords are the harder chords on the instrument to learn.

When you are learning this chord, the strings may buzz. This is a common experience many guitar players have. You need to press down firmly on the strings to stop them from buzzing. You should also ensure that the action is low enough and that you're using light strings. If you continue to play and practice the chord, the buzzing will go away. Also, have a look at your fingers and make sure you have proper finger placement. 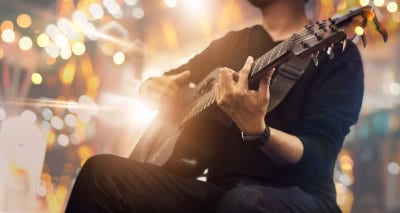 You can master the F chord. It will take some time, but it opens up a lot more chords on the guitar once you can Master it. You will find the other barre chords a lot easier once you learn the F chord. Your guitar teacher will be able to help teach and train you on these chords so that you do them with the correct hand placement and minimise any risk of injuries and less frustration too.