How to Write a Guitar Solo

Many guitar players are intimidated when it comes time to writing a guitar solo.

It is not as difficult as you might think. Here is how you can begin to write a guitar solo, even if you are new to the process.

Get the Feeling Down

The first thing you need to figure out is what the feeling of the song is.

For example, you may have a song that is quite fast. If the song is nothing but fast phrases, then the solo is probably going to be fast too. If your song is slower, then you might want some slower phrases.

You also have to be aware of the genre that you are writing in. Certain genres will require you to play a little bit differently.

For example, country music is going to have a lot of bends and pull-offs. The same can be said of blues music or rock. Heavy metal, on the other hand, is going to have more fast runs and maybe advanced techniques like tapping or the use of the whammy bar.

Before you write a solo, you have to know the key that you are in. Once you know the key, you can use the corresponding scales in that key. The best place to start is with the Pentatonic minor or major scale. For example, if your song has the chords G, C, and D, you are in the key of G Major.

Base Chords in G Major

You could use a regular G major scale over your chord progression, or you could also use the G pentatonic major scale, as both scales would work over these chords. This is why it is important that you understand chord progressions and key signatures of the music that you are playing because this will help you write the solo.

Important to know the notes of the fretboard before you start soloing on your own.

You need to know the root note of the key that you are in because a lot of your solo is going to gravitate towards that root note. You should also know the major positions of the scales that you want to use for the solo.

A good place to start is to know all the positions of the pentatonic minor and the pentatonic and major scale. These are two scales that are used a lot in modern music.

Improvise and create a guitar solo on the spot

One thing you can do is to listen to music and then improvise a solo over the top of the chord progression. This is where you can try out various ideas.

Even as a complete beginner, you can start doing this using just a few notes from the pentatonic scale. Adding a few phrasing elements here and there.

Practise playing in time with the backing track that you are listening to.

If you have been learning a bunch of licks, you can then pick the licks that you like and work on stringing them together into a complete solo for the music.

You can get good at this by listening to backing tracks and then improvising solos over those backing tracks. This will help you in the process of writing your own solo over a chord progression that you have created yourself.

Don't worry about how the solo sounds at first. The whole idea of improvising is to try different ideas until you find something that you like.

Once you find phrases that you like in the solo, you can add other ones to it. Once you get good at this, you can improvise freely, and even your improvised solos are going to sound excellent. 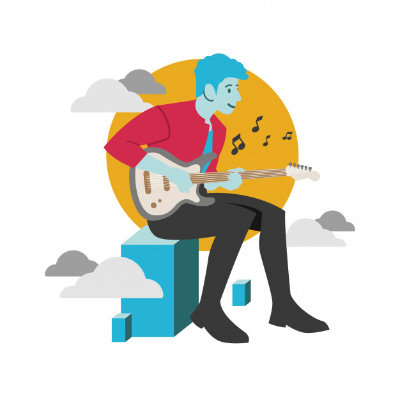 The first solo that you write should be something simple. Do not try to make it too complex as you make it confused, and you won't be able to capture the feeling of the music as well. A lot of the best solos ever written are not that complex.

Try to write a solo with only a few phrases and as you get better, add more phrases into your solos until they are a little longer.

One of the most important things to do when writing a solo is to create something that is interesting. You can do this by breaking the solo up and adding dynamics such as bends, slides, pull-ups, hammer-ons, and other guitar playing techniques.

A wall of notes can sound exciting, but it is important to break this up as the solo will sound more interesting to the listeners’ ear.

You should think as a listener when creating your solo. Ask yourself, would I enjoy listening to this as a music fan? If the answer is no, you probably have to work on the solo.

You will find it easier to write guitar solos if you know a little bit of music theory.

Can This Video Game Improve Your Guitar Playing?

Okay, I know what you might be thinking… “Darryl, can a video END_OF_DOCUMENT_TOKEN_TO_BE_REPLACED

Should You Be Setting Goals For Guitar?

Everyone knows about the importance of goal setting. But if you do END_OF_DOCUMENT_TOKEN_TO_BE_REPLACED

Do You Believe In This Common Strumming Myth?

There Are Two Paths You Can Take On Guitar…