There’s one thing that throws every beginner into a fit of rage that would rival any villain in a superhero movie...

Getting chords to sound crystal clear.

If you know ways to improve this already... that’s great!

Today I’m going to show you a simple quick fix that can help get those strings ringing out clearer.

(This only takes one second to do. And no, this isn’t the only thing that helps… but it is an important piece.)

This works if you’re 6 or 60… plus it can lower the risk of getting pain around your wrists.

So what is this quick fix?

I actually forgot that some people do this. Yesterday I was hanging out with one of our newest students, Steve (he’s 71 by the way…) and he said this to me…

“Dan, I’ve been practicing these chords for 3 days and I just can’t seem to get them.”

But one of them caught my eye immediately. And I knew that if we didn’t fix it, there’s no way I was going to get this guy’s chords sounding better.

See Steve has an acoustic guitar. And like many he struggled to see the strings clearly. His solution? Tilt the guitar so that it was almost laying on his lap with the strings facing up toward the ceiling.

The moment I saw this my initial thought was: “Oh man, no wonder this guy has been struggling for three days.” 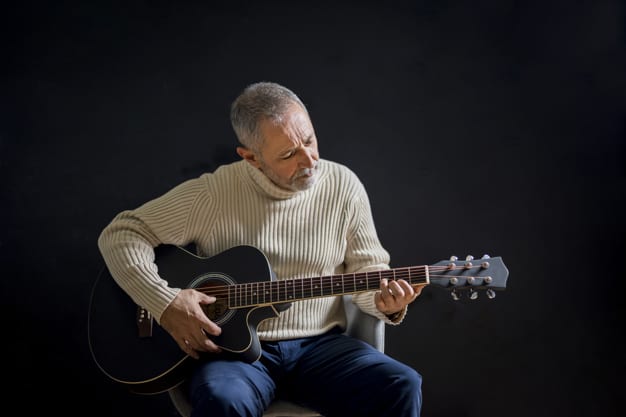 So we took some time to fix it. All I had to do was point it out to him... explain why it wasn’t helping... and then show him the correct position. (Putting the guitar more upright.)

Showing him the correct position took exactly one second to do.

When we made the change… he was able to get some of the strings to ring out more too. All because he wasn’t trying to play the guitar at this awkward angle.

His words were: “You’ve helped me improve more in 5 minutes than I have over the last THREE DAYS.”

I’d be lying if I said that sitting with the guitar upright is the “one fix that solves ALL chord problems.” It isn’t. But it is an important piece… and if you don’t do this…

Your chords will likely never ring out clearly

I know it sounds simple. But next time you play guitar, double check the angle to make sure you’re not laying it too flat on your lap.

P.S. If you haven’t seen one of our latest videos…

Here’s a guy who went from beginner to singing and playing a Red Hot Chili Peppers song. (This is hard to do!)

But I’m sure if you listen to his guitar playing you’ll find it motivating.

This July, Chris (... and his band Cosmic Starz) released their new END_OF_DOCUMENT_TOKEN_TO_BE_REPLACED

What Are You Proud Of This Year?

The Secret To Your Guitar Practicing Success