How To Instantly Improve Your Electric Guitar Tone

If you are into heavy metal or rock, or even aggressive electric blues that uses a distorted guitar tone, then what follows is for you. 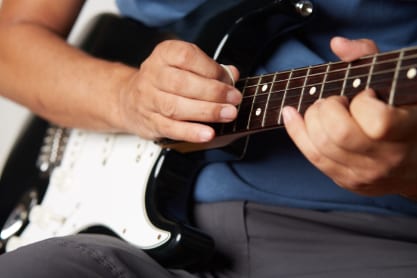 The quest for the ‘perfect’ distortion sound can be quite maddening for many of us. Hands up if you’ve gone through countless amplifier models, stomp boxes, multi effect units, modellers etc and still keep getting doubts and wondering if you’ve really found ‘it’, even after years of experimentation.

Let me share with you something I discovered after many years of such experimentation, which I believe can help you a lot.

"Guitar Tone Is In The Hands"

You may have heard some people say: “guitar tone is in the hands.” That saying can point us in the right general direction, but taken at face value it’s a bit flawed, or at least incomplete.

To a degree that is partly true, at least in so far as how accurate, clean, in time and expressive your playing is.

But all those qualities are really the result of your skills and style.

And as we can see how the lion’s share of your actual ‘tone’ will be largely dependent on the equipment you are playing through. Everything else staying the same, your tone will still vary greatly according to exactly what goes in your signal chain and how you ‘dial it in’, right?

That much is true. However, let me fill you in on a ‘secret’ that is practically guaranteed to greatly improve your tone no matter what level of skill you are at right now, and what kind of equipment you play through. Here it is:

Learn To Use Your Guitar Pick Hard!

Yes, the difference between a gutless, muddy tone that doesn’t cut through as soon as there are other instruments in the mix, and a rich and expressive tone that dominates the soundscape, can be as simple as that.

Why is this important?

Basically, it boils down to physics.

First of all – and this is true for practically all instruments out there, whether they generate sound via strings, or a column of air, or a stretched skin which is hit, or whatever – the more force energizing the sound generator, the bigger and fuller the sound will be.

The louder you play, the more harmonics will be present in your tone.

This makes your tone stand out and cut through the mix a lot more. The attack of each note will also be a lot stronger, which again helps in giving more power and clarity to your playing. This is especially true when playing fast or busy parts.

Secondly, and more specifically to electric guitar when playing with a distorted tone, the harder you play, the stronger the electric signal coming out of the pickups will be. This will make it a lot easier to drive your amplifier hard. This means that you’ll be able to get heavy levels of distortion, saturation and sustain while using less gain. 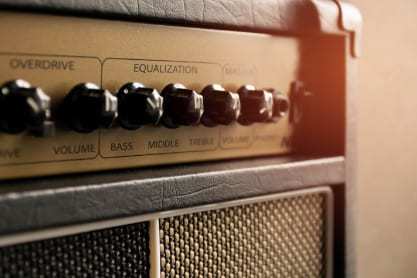 What are the advantages of this?

So, just how much gain is too much on your guitar?

Here’s a rule of thumb I suggest you go by.

If your tone is so compressed that all notes come out at basically the same volume and level of distortion no matter how you play and even with the slightest touch of a string, then you’re using too much gain.

It’s likely that you are using so much gain to try and get the level of ‘growl’, sustain and percussion you desire from your guitar tone. But there’s a big downside to this: you lose your playing dynamics and expression, and your playing starts sounding muddier, noisier and sloppier. Your tone also gets lost in the mix very quickly as soon as there’s some other instrument in addition to your guitar.

If this seems to describe your situation, I’ll also wager that you aren’t getting the power, sustain and fullness of tone you want because you pick too softly, which results in a weak signal from your guitar that sounds too subdued and doesn’t drive your amp / distortion device hard enough. So then, to try and compensate, you end up piling on too much gain.

What's the solution to combat this?

Try this instead: set your gain so that you get your maximum desired level of saturation and distortion only when you pick HARD. When you pick softly, you should hear the tone and volume level change in response to that. The volume will drop, and the tone will sound cleaner and less ‘cutting’. If this doesn’t happen, then you are using too much gain and your tone is too compressed.

Try it out. Get used to ‘earning’ your tone by picking with a lot of energy and intention. I’m pretty sure that you will like the result. Your tone will be clearer and will sit in the mix a lot better, while also sounding cleaner with less background noise and a lot less muddiness.

Hit those strings hard and enjoy the results. 😊

Aldo Chircop is a guitarist, composer, producer and guitar teacher based in Malta. He is president and chief instructor of Malta Rock Academy, home of the best guitar lessons in Malta.