A lot of aspiring guitarists get sucked into in learning as much material as they can.

Gaining more knowledge becomes its own pursuit. Students can get so caught up in learning new licks, riffs and solos all the time that they never stop to actually learn how to use it.

When I was starting guitar I had a thirst for knowledge and bought every book, dvd and magazine I could get my hands on. And no matter how much resource material I had, it was never enough.

I could play guitar very well and knew a tone of licks but found whenever I learned new things I would quickly forget the old ones.

I also found that I could play things in isolation but struggled to tie any of my ideas together cohesively.

This was a major source of frustration for myself and a problem I see facing countless other guitarists as well.

The first comes from a repertoire perspective while the latter focuses on creativity.  Something that a lot of guitar players don’t start to develop until they’ve all been for several years.

If we take a standard 12 bar blues progression in the key of A.

This will allow you to play one idea throughout the solo (saving you heaps of effort). And due to the consistent rhythmic motif behind heard by the listener. This will make you sound like a pro right away.

Our lick is a 6 note idea using the middle two strings of the A Minor Pentatonic Scale.

It uses 8th notes and shouldn’t be tricky to play.

It’s important to visualise it as a 4 note box pattern because when you go to the D chord you want to change the 5 & 7 to 10 & 12 so that it matches the D Pentatonic Scale.

You are literally playing the same idea in 3 different places but as the chord changes it will sound new to the listener. Here’s how it looks in a solo. 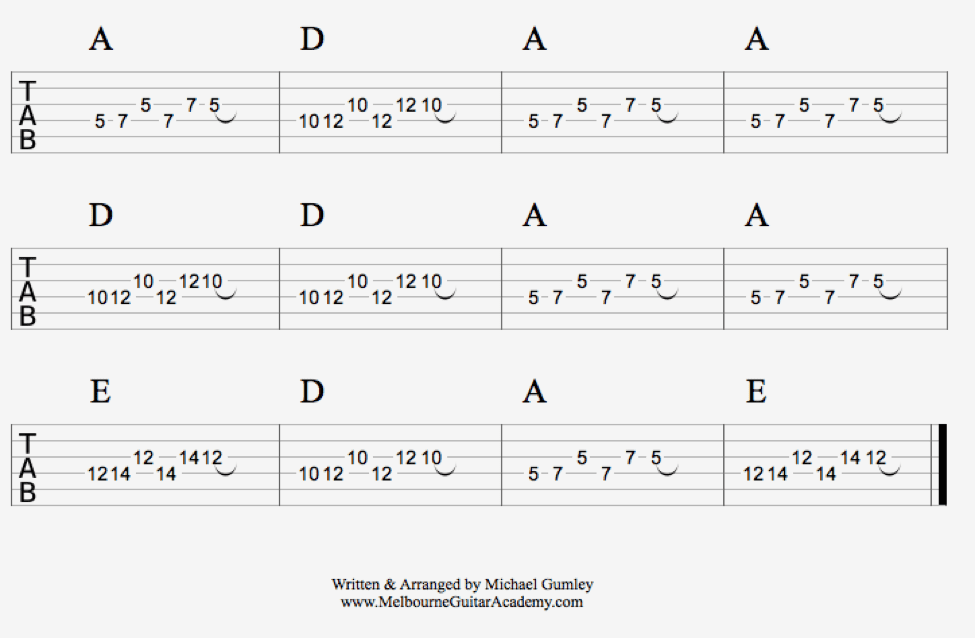 You can play an entire blues chorus using the same lick and all you need to do is move the notes to fit the chord that is being played.

If you have to solo for a 2nd or 3rd round. Then you only need two more licks. If you had 10 licks you could play over 10 rounds using the same idea.

At some point you are going to want to change the ideas up. And as you advance your skills and repertoire of licks you’ll be able to expand on these ideas and change them on the fly. But this a great way to get some really great sounding solos right away.

Try coming up with your own licks and applying the concepts you’ve learned in this lesson.

Do you want to find out whether learning to play scales is going to be useful for you, find out here.

If you are struggling with your guitar speed, find out more here.

Michael is a progressive metal guitarists and highly sought after guitar teacher in Melbourne, Australia. He has helped countless students improve their improvisational skills through the application of really simple concepts. If you’d like additional resources or help with your own playing get in touch.